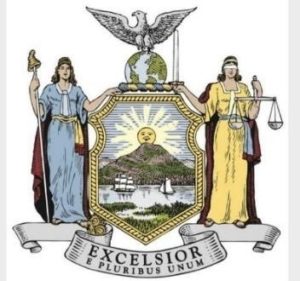 Where are the COVID-19 Clusters?

Fines for Sponsors of Mass Gatherings Increased to $15,000

New Rules and Restrictions in Effect for Minimum of 14 Days

Governor Andrew Cuomo this week announced a new cluster action initiative to address COVID-19 hot spots that have cropped up in Brooklyn, Queens, and Broome, Orange and Rockland Counties.

Working with the top public health experts, New York State developed a science-based approach to attack these clusters and stop any further spread of the virus, including new rules and restrictions directly targeted to areas with the highest concentration of COVID cases and the surrounding communities. The new rules will be in effect for a minimum of 14 days.

The plan was developed in consultation with national public health experts including Dr. Noam Ross of EcoHealth Alliance, Dr. Michael Osterholm of the University of Minnesota and former CDC Director Dr. Tom Frieden. As might be expected litigation has commenced to challenge the plan.

“A cluster is just that – it’s a cluster of cases, a high density of cases, and it seeps and grows from that cluster almost in concentric circles. Drop a pebble into the pond, the pebble goes in, then there’s one ring, two rings, three rings, and the rings continue across the pond. When you see the cluster, you have to stop it at that point,” Governor Cuomo said.

The initiative is composed of three steps:

The initiative will currently apply to clusters in the following areas:

The initiative will divide clusters and the areas around them into three categories with successively higher restrictions within each one. The enforcement of the zones was in effect in all areas today, with some areas starting Thursday.   Below is a description of the zones: 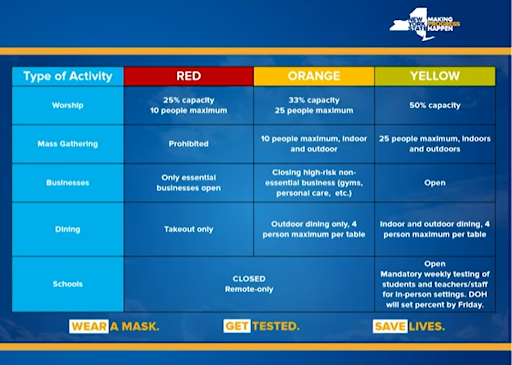 Governor Cuomo also announced that fines for the sponsors of mass gatherings in violation of state public health rules will be increased to $15,000.

The cluster proposal was met with unrest in some parts of the State, with protests erupting in Brooklyn following the announcement.

On Thursday, Agudath Israel of America, a Queens-based Orthodox Jewish organization and the Roman Catholic Diocese of Brooklyn announced separate lawsuits to halt restrictions on religious gatherings put in place by the Governor’s cluster plan. 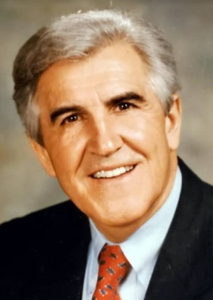 Senator Joseph L. Bruno, the charismatic former New York State Senate Majority Leader who rose from humble beginnings to become one of the most prominent leaders in New York State history, passed away peacefully on October 6 at this Brunswick home, surrounded by his loving family.  Senator Bruno led the Senate Republican Majority from 1994 to 2008.

“He was an honorable respectful sincere public servant, who truly believed what he believed and worked very hard at it,” Governor Andrew Cuomo said. “He was also a great representative for his district.”

Senator Bruno was renowned for his staunch support of development in Upstate New York.  He focused his efforts on improving the region’s transportation hubs, including Albany International Airport–where a bust of his image is on display–and the Rensselaer rail station.  Senator Bruno also developed the foundation for biotechnology and nanotechnology industries across upstate, including the Global Foundries computer-chip fabrication plant in Malta and software company Maplnfo, Inc. at Rensselaer’s Tech Park.   In addition, the 4,500-seat minor league baseball stadium at Troy, New York’s Hudson Valley Community College—”The Joe” — is named in his honor.

Former Governor George E. Pataki, who served in the Senate with Senator Bruno from 1983 until he was elected governor in 1994, said, “Joe left his mark as the leader of the New York state Senate. For 12 years Joe Bruno was a tremendous partner in Albany as we tackled the tough problems to bring New York back from the brink of ruin. On issue after issue, Joe was an indispensable ally. From reforming our criminal justice system to keep violent criminals behind bars to jobs and economic development, Joe was a stalwart leader. The success of Global Foundries is a testament to our partnership and a huge part of Joe’s lasting legacy of advocacy for the Capital Region.”

The son of Italian immigrants, Senator Bruno grew up in Depression-era Glens Falls, New York, helping his family make ends meet by selling pastries, newspapers, and ice.  Following graduation from Skidmore College, Senator Bruno joined the U.S. Army.   He served in Korea, where his duties included deactivating and removing unexploded bombs. He received a Bronze Service Star and other honors, as well as becoming the undefeated light heavyweight champion of 25th Infantry Division.

In 1966, Bruno worked on the campaign staff of Republican Governor Nelson Rockefeller, and later became a special assistant to Assembly Speaker Perry Duryea.  Senator Bruno was elected to the state Senate’s 43rd District in 1976, representing Rensselaer and part of Saratoga counties.

He is survived by his four children and his wife, Kay Stafford.  Senator Bruno’s first wife, Barbara “Bobbie” Bruno, died in 2008 at age 77 following a long battle with Alzheimer’s disease. 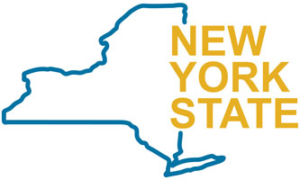 Chapters of the Laws of New York

Chapter 205 Sponsored by M of A Epstein/Senator Thomas — Relates to the docketing of adjudications of certain violations of laws enforced by the New York city department of consumer affairs.

Chapter 211 Sponsored by M of A Weprin/Senator Liu — Relates to prohibiting the requirement of inmates to waive religious rights.

Chapter 218 Sponsored by M of A Bronson/Senator Helming — Relates to licensing restrictions for manufacturers and wholesalers of alcoholic beverages on licensees who sell at retail for on-premises consumption.

Chapter 225 Sponsored by Senator Kavanagh/M of A Rozic — Enables employees to receive electronic confirmation in lieu of paper pay stubs.

Chapter 228 Sponsored by Senator Harckham/M of A Rosenthal L — Prohibits unfair discrimination by insurers for individuals that use prescriptions to block the effects of opioids.

Chapter 232 Sponsored by Senator Mayer/M of A Jacobson — Relates to changes to the entrance and exit of polling places.

Chapter 248 Sponsored by Senator Montgomery/M of A Mosley — Authorizes the Commissioner of General Services to sell certain land to TCH Holdings, LLC.

Mayor Bill de Blasio this week launched a ‘Find Your Zone’ map. The map, created by DoITT, NYCEM and DOHMH to make the State zone maps searchable, allows New Yorkers to enter their address and find what zone they live, work, shop, and go to school in.

According to the Mayor, the initiative builds on the City’s initial proposal to enforce a closure of non-essential businesses and schools, restrictions in all zones will be in effect for a minimum of 14 days.

Three of the six zones identified by Governor Andrew Cuomo as COVID “hot spots” are located in New York City.   Two are in Queens, and one in Brooklyn.  As the Governor described, the most restrictive requirements are in the inner red zone (see page 2). 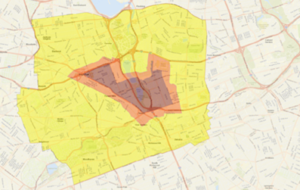 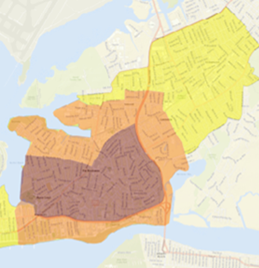 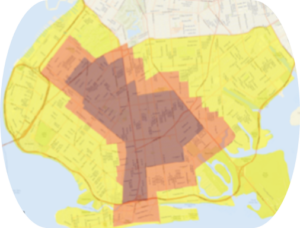 The Mayor’s tool allows you to search within these cluster zones and will be updated if new zones are established.

Excelsior Scholarship to be Awarded for Fall 2020; Future Awards Uncertain

Students who applied for the Excelsior Scholarship for the Fall 2020 semester will receive full financial rewards despite the state’s budget deficit.  However, future awards remain uncertain.

The Excelsior Scholarship provides free tuition for students who come from a family whose household income is $125,000 or less. As a result of COVID-19, the New York State Higher Education Services Corporation (HESC) initially stated that the scholarship may have to be reduced or prioritized for current recipients. However, HESC this week indicated that students will receive the full scholarship for the Fall 2020 semester, but future awards may need to be reduced for the Spring 2021 semester.

Mayor Bill de Blasio this week announced the SoHo/NoHo Neighborhood Plan will advance into the City’s public land use review process, a major milestone toward realizing a shared vision for an inclusive and vibrant SoHo and NoHo. The proposal would update 50-year old zoning to offer greater flexibility for ground floor use by businesses and arts and cultural organizations, while incentivizing the creation of new permanently affordable homes. This proposal will open two neighborhoods with exceptional access to transit, schools, jobs, and other amenities to many more New Yorkers and advance the City’s goals of fair housing and equitable growth. 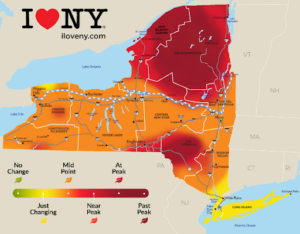 Brilliant and colorful fall foliage will continue its progression across New York State this weekend, with peak and near-peak conditions expected throughout Upstate New York, according to volunteer spotters for Empire State Development’s I LOVE NY program.

(Applications must be submitted no later than October 9, 2020).

Electronic Request for an Absentee Ballot

(Online request must be made by October 27, 2020. Please be advised that despite this deadline, the Post Office has advised they cannot guarantee timely delivery of ballots applied for less than 15 days before an election).

Access to Capital for Small Businesses during the COVID-19 Pandemic