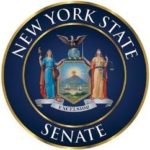 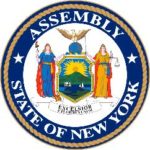 Both houses of the New York State Legislature advanced their one-house budget proposals this week, armed with $12.9 billion in federal funding from the American Rescue Plan. The Senate and Assembly proposals each total approximately $208 billion and restore the bulk of the funding cuts included in Governor Andrew Cuomo’s $193 billion Executive Budget released in January.

The Senate and Assembly also put forth plans to increase taxes between $7 billion and $8 billion fueled by proposals to tax wealthy New Yorkers.

“We’re very grateful to our congressional delegation,” Assembly Speaker Carl Heastie said. “That money helps make us whole. But … we need to start making investments if this state is really going to start to recover.”

According to Speaker Heastie, the budget plans are similar, “in the same neighborhood, but maybe not the same zip code.” Following the approval of the one-house resolutions, the Legislative budget conference committees held their initial meetings and will continue to meet over the next two weeks until a consensus is reached.

In addition to increasing funding, both houses have rejected language that would give the Director of Budget the authority to make mid-year adjustments to the budget in the event of a mounting deficit and expressed the preference of handling certain issues outside of the budget, including legalization of adult-use cannabis, election law reform, and pharmacy benefit manager regulation. The plans included:

Education: The Assembly Budget would restore $2 billion, including $29.5 billion in funding to General Support for Public Schools, an increase of $3.1 billion or 12 percent, over the 2020-21 School Year. The Senate provided a total School Aid increase of $5.7 billion, including a $1.37 billion Foundation Aid increase and $3.85 billion in federal Coronavirus Response and Relief Supplemental Appropriations (CRRSA) Act funding.

Specifics regarding the one-house proposals can be found here: Senate Assembly.

The Senate and Assembly this week put forth plans to increase taxes between $7 billion and $8 billion, fueled by proposals to tax wealthy New Yorkers.

The Assembly proposed new levies include:

➢ Personal Income Tax (PIT) High Income Surcharge: The Assembly proposes to establish a new PIT surcharge on taxpayers with incomes over $5 million. It increases the current 8.82 percent rate to 9.85 percent and establishes two new brackets as follows: 10.85 percent for taxpayers between $5 million and $25 million and 11.85 percent for taxpayers over $25 million. The Assembly does not include language that would allow for high income earners to prepay their liability and to receive an out-year tax deduction. Total revenue: $4.3 billion.

➢ Establish a Pied-a-Terre Tax: The Assembly includes language to establish a

City, consisting of a sliding tax rate, which is based on the type of real property and value of

the home. For family residences of one to three units, the tax would range from 0.3 percent

of the estate tax by four percentage points, from 16 percent to 20 percent, for estates with

➢ Reinstate the Capital Base Tax: The Assembly includes language to reinstate an alternative minimum tax on business corporations at the rate of 0.15 percent of the taxpayer’s  total business capital. Total revenue: $150 million.

The Senate increases the top state personal income tax rate on the highest earners and raises All Funds revenue by $4.15 billion in SFY 2021-22.

➢ Corporate Franchise Tax Rate: The Senate would increase the corporate franchise tax rate by three percentage points which would increase All Funds revenue by $813 million in 2021-22.

➢ Reintroduce the Capital Base Test to the Corporate Franchise Tax: The Senate proposal would increase All Funds revenue by $151 million in SFY 2021-22.

➢ Capital Gains Tax on Taxpayers Subject to Top State Personal Income Tax Rate: The Senate would impose a 1% surcharge on income from capital gains which would increase All Funds revenue by $614 million in SFY 2021-22.

➢ Estate Tax Rate Increase: The Senate would increase the estate tax by two percent, which would increase All Funds revenue by $162 million in SFY 2021-22.

➢ Recording of Mezzanine Debt and Preferred Equity Investments in New York City: The Senate budget includes mezzanine debt in the mortgage recording tax, which would increase All Funds revenue by $199 million in SFY 2021-22 and dedicating the revenue for the New York

➢ Residential gatherings of up to 25 people can be held outdoors.

➢ New York’s Major League Baseball teams, the New York Mets and New York Yankees, can resume play with spectators in the stadiums, beginning April 1. Professional sports in large outdoor stadiums that hold 10,000 people or more will be allowed to reopen at 20 percent capacity. Attendees must show proof of a recent negative test or completed vaccination series prior to entry and are subject to strict state guidance on face coverings, social distancing, and health screening. If the public health situation continues to improve, State Department of Health may discontinue testing and vaccination entry requirements in mid-May. Vaccinations will continue to be administered at Yankee Stadium and Citi Field during the MLB season.

➢ Gyms, movie theaters, bowling alleys, casinos, and billiards halls will be able to stay open past 11 p.m. The curfew remains in place for restaurants, bars, and catered events. 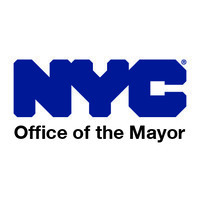 Mayor Bill de Blasio, labor unions, industry leaders, and advocates this week called on the State Legislature to pass Community Hiring legislation to help ensure a fair and equitable recovery by providing employment and apprenticeship opportunities for low-income people and residents of economically disadvantaged communities or NYCHA. Over 130 organizations recently sent a letter to the State Legislature in support of the Mayor’s plan.

“COVID-19 has had a disproportionate impact on low-income communities and communities of color,” Mayor Bill de Blasio explained. “A recovery for all of us will be built by focusing on these communities and creating good jobs for the people who need them the most. Community hiring legislation will put more money in the hands of working people by creating new opportunities for New Yorkers in need to succeed. I urge the State Legislature to join the cause and pass community hiring into law.”

Proponents assert that economic disparities have widened due to the economic and health effects of COVID-19. State legislation to allow the City to develop and implement a Community Hiring Program will help reverse that trend.

For construction and building service labor, hiring goals are based on geographic areas that are economically disadvantaged. For other work, such as a technology or inspection services contracts, hiring is based on an individual’s income. This plan would generate an estimated 40,000 jobs annually for target individuals and communities and would provide an estimated $1 billion in wages and benefits for newly hired individuals during the first full year of the program. Over the next five years, the City estimates the Community Hiring Program will generate nearly 200,000 jobs for low-income people and residents of economically disadvantaged communities.

This legislation, according to Mayor de Blasio, enables the City to connect contractors with apprenticeships and referral sources such as workforce development programs that will help them meet their hiring goals by training and referring qualified talent. Such workforce development programs could include ones that typically serve NYCHA residents, people with disabilities, justice-involved individuals, CUNY graduates or immigrants. 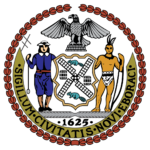 The City Council yesterday approved Resolution 1529-A, sponsored by Council Member Mark Levine, calling upon on the State Legislature to pass, and Governor Andrew Cuomo to sign, legislation to protect the State’s safety net providers and special needs plans by eliminating the Medicaid Pharmacy Benefit Carve-out.

The Resolution calls for the elimination of the pharmacy carve-out which would be detrimental to their operations, and would lead to large budgetary losses, reduced services, clinic closures, and staff layoffs. In April 2020, Governor Cuomo and the New York State Legislature passed a budget that included a plan to transition, or “carve out,” the Medicaid managed care pharmacy benefit to a fee-for-service model.

According to Council Member Levine, since most individuals with Medicaid in New York State have managed care plans, this carve out would harm 340B providers because they would no longer be able to purchase prescription drugs at a significantly reduced price and use those savings to provide numerous services addressing social determinants of health and health inequities. 340b providers include community health centers, HIV providers, sexual health clinics, many rural hospitals, and other safety net providers.

Proponents assert if New York State proceeds with the carve out, safety net providers will lose hundreds of millions of dollars they now use for patient care, and the State and the federal government will instead receive more rebates. These safety net providers are the same entities providing care to the City’s hardest hit communities, including Black and Latino/x communities, lower income communities, and those who are immigrants, during the COVID-19 pandemic and beyond.

Both the State Senate and Assembly included reform language in their respective one-house budgets. The Senate advocates a full, immediate repeal, while the Assembly called for a delay of implementation to 2024.

Bills Approved by the City Council

Int. No. 864-A, sponsored by Speaker Corey Johnson, would expand the investigations that the Department of Health and Mental Hygiene (DOHMH) is required to conduct under existing law whenever it is alerted about a child with an elevated blood lead level.

Int. No. 874-A, sponsored by Council Member Margaret Chin, would establish requirements to strengthen interagency communication, tenant notification, and inspections related to lead-based paint and lead dust hazards. First, this bill would require the Department of Health and Mental Hygiene (“DOHMH”) to add certain information regarding lead dust hazards to existing pamphlets. This Week In New York/Page 7

Int. 2198-A, sponsored by Council Member Steven Matteo, would amend the building code to add additional freeboard for most newly constructed or substantially improved buildings located in the floodplain, providing additional floodproofing.

Intro 2236-A, sponsored by Council Member Mark Levine, would require Department of Health and Mental Hygiene, or another agency designated by the mayor, to develop and maintain a website which operates as a unified scheduling system for COVID-19 vaccinations for all cooperating vaccination locations and providers located in New York City. 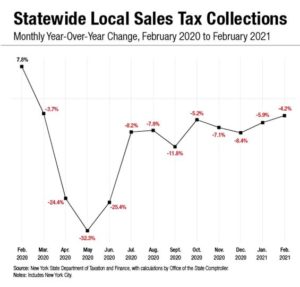 Revenues continued to shrink, but the decline last month was less steep than in January (5.9 percent) and December (8.4 percent), and the double-digit declines during the earlier months of the pandemic.

All regions in the state experienced sales tax collection declines for February, ranging from 0.1 percent in the Mohawk Valley to 9.8 percent in the Finger Lakes. New York City’s collections decreased by 4.5 percent, down $27 million compared to February 2020.

The complete Request for Proposals is available here. Proposals are due on April 23, 2021.

Mayor Bill de Blasio this week appointed John Scrivani as the expected next Commissioner of New York City Emergency Management (NYCEM). Scrivani, currently serves as Director of the Office of Safety, Security & Emergency Management at the Virginia Department of Transportation (VDOT), is a fourth-generation Staten Islander, a 14-year veteran of the NYPD, and the former Incident Commander of the New York City Hurricane Sandy Debris Task Force. Scrivani will assume the role if the U.S. Senate confirms NYCEM Commissioner Deanne Criswell, who was appointed by President Joe Biden to serve as Administrator of Federal Emergency Management Agency.

In 2008-2009, Scrivani was Deputy Director of the Special Operations Division at the NYC Office of Chief Medical Examiner (OCME), where he also oversaw operations and safety for the World Trade Center Potential Human Remains Recovery Project and managed the ME Special Operations Response Team.

He is a graduate of the State University of New York, Excelsior College.